SpaceX just launched one of its boosters for the 11th time 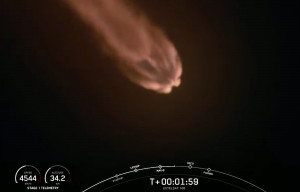 SpaceX sent one of its first-stage boosters skyward for the 11th time on Tuesday evening. However, unlike its 10 previous flights, this time it didn't return. The mission launched from Space Launch Complex 40 (SLC-40) at Cape Canaveral Space Force Station in Florida at 9:57 p.m.

ET, lighting up the night sky as the Falcon 9 rocket roared toward space.

Thirty-five minutes after leaving the launchpad, the Falcon 9's second stage deployed a communications satellite to a geosynchronous transfer orbit for French satellite operator Eutelsat. The Falcon 9's first-stage booster was SpaceX's oldest active rocket and previously supported the launch of the Telstar 18V and Iridium-8 missions, as well as nine missions deploying Starlink internet satellites. SpaceX usually lands its first-stage Falcon 9 boosters shortly after launch, but as this mission required more power to deploy the 12,000-pound satellite into orbit, there wasn't enough fuel to bring the booster back.

Using the same section over and over again has allowed SpaceX to offer launch services at more competitive prices as it doesn't need to build a brand new rocket for each mission. But as Tuesday's flight demonstrated, occasionally it's just not possible to bring it home. This was the 52nd mission involving a Falcon 9 rocket in 2022, with 12 more planned before the end of the year.

It means that 2022 will be SpaceX's busiest to date in terms of Falcon 9 missions, smashing last year's record of 31 launches. At the start of this month, SpaceX also launched its more powerful Falcon Heavy rocket for the first time in three years in a mission for the U.S. Space Force.

It's also preparing for the maiden launch of its next-generation Super Heavy rocket, which will become the most powerful rocket ever to fly when it eventually lifts off.

NASA is planning to use the spacecraft section of the vehicle to land the first woman and first person of color on the lunar surface in the Artemis III mission currently slated for 2025.