If you're into complex LEGO builds, Transformers toys, or both, have we got an Amazon Black Friday deal for you. Amazon is offering the LEGO Transformers Optimus Prime for only £144.99, a 20% drop from its original £180 price point. Earlier this year, LEGO increased the MSRP of many of its popular building kits.

The LEGO Transformers Optimus Prime (10302) was one of the sets, although it didn't go up in price nearly as much as other LEGO sets did. Originally listed at £169.99, it suffered a relatively minor £10 "readjustment" that bought the price up to £179.99. This Black Friday LEGO deal brings the price back down to way below the original MSRP.

Transforms from robot to truck

The LEGO Transformers Optimus Prime is no small robot. It measures a respectable 14" high, 11" deep, and 8" wide in its robot form and weighs in at about 4.5 pounds. The robot form features 19 points of articulation and several familiar accessories like the Autobot Matrix of Leadership, Energon axe and cube, ion blaster, and jetpack.

The total brick count is 1,508 pieces, which averages to just under 10 cents per brick. That's a solid deal, especially if you factor in the sheer awesomeness of this set.

This is one of the more complex LEGO builds and it's officially recommended for ages 18+, perfect for the adult collector or a joint venture involving you and your kid. The fun doesn't stop when your build is finished, either. The best feature of all is the ability to transform from robot to truck.

Optimus Prime can transform from robot to truck and back without taking the model apart. This, in our opinion, makes it so much better than a lot of the other complicated LEGO builds that are overly fragile and designed to be displayed only.
We Build the LEGO Optimus Prime 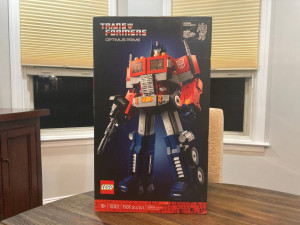 Take a look at our guide to the best Black Friday deals.