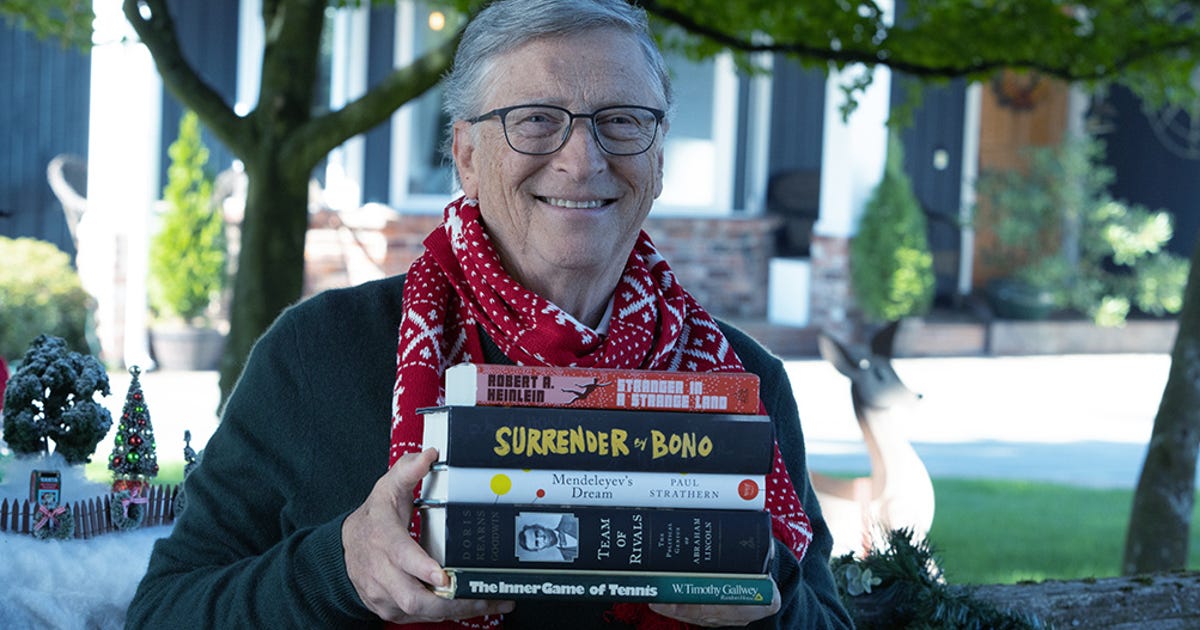 Bill Gates enjoys sharing his favorite recent reads on his Gates Notes blog. But this time, the Microsoft co-founder decided to share five of his all-time favorites. (His write-ups are a little different than the casual book recommendations you might give your friends -- one of his choices is a biography by rock star Bono, a personal friend of Gates.)

An accompanying video shows Gates stopping in Kirkland, Washington; New Delhi, India; Cambridge, Massachusetts; Johannesburg, South Africa; and Rio de Janeiro, Brazil, leaving stacks of the five books in Little Free Libraries in each place. He also reveals he's left a similar pile in the Little Free Libraries of other cities, and encourages readers to check if there's a location nearby.

Gates also reveals he's looking forward to spending the holidays with his family, and drops one unusual detail: "We usually wear matching pajamas on Christmas," he says. His kids are all grown now, but whatever floats your holiday boat, Bill. Here's a look at Gates' five recommended books.

Stranger in a Strange Land, by Robert Heinlein

Gates raves about Robert Heinlein's Stranger in a Strange Land, the 1961 science fiction classic about a human raised by Martians, calling it "a favorite since middle school."

"I think the best science fiction pushes your thinking about what's possible in the future, and Heinlein managed to predict the rise of hippie culture years before it emerged," Gates writes.

The most recent book on Gates' list is Surrender: 40 Songs, One Story, a memoir by U2 frontman Bono that came out Nov.

1. "I'm lucky enough to call Bono a friend, but a lot of the stories he tells in Surrender were new to me," Gates says.

Gates also raves about Team of Rivals: The Political Genius of Abraham Lincoln, by Doris Kearns Goodwin. "Goodwin is one of America's best biographers, and Team of Rivals is arguably her masterpiece," Gates writes, noting that he "can't read enough about Abraham Lincoln."

The Inner Game of Tennis, by Robert Gallwey

Gates has recently been raving about the flourishing sport of pickleball, but he's also a longtime tennis player.

And he recommends the 1974 book The Inner Game of Tennis, by Robert Gallwey. And it's not just for athletes. "(Gallwey) gives excellent advice about how to move on constructively from mistakes, which I've tried to follow both on and off the court over the years," Gates says.

You've likely never read any book about the periodic table, but why not start at the top?

Gates says Paul Strathern's Mendeleyev's Dream is the "best book I've ever read about the periodic table." And much as The Inner Game of Tennis isn't just for jocks, this book isn't just for science geeks, Gates says.

"Strathern describes the story of the periodic table as 'a wayward parable of human aspiration,' and I agree," Gates writes. "The history of chemistry tells us as much about the evolution of human thinking as it does about the science of matter."