A STREET artist who painted a stunning NHS mural on the side of a Crown Paints building during the height of the Covid pandemic has been immortalised in Lego.  Keiron 'Curly' Whitehead, from Darwen, is known for his graffiti work in and around the town, but is probably best recognised for painting a huge NHS mural on the Crown Paints wall at the corner of Hollins Road, which used to have a bright Union Jack flag on from the 2012 Queen's Diamond Jubilee. But two years on since he made the wall famous, and Curly and his mural have now been turned into Lego by a Darwen based design company.

A graffiti artist for more than 20 years, Curly also works full-time for the NHS, and said: "Can you believe it's been two years since I painted the infamous Crown Paints and Curly's rainbow NHS mural?  "As much as I'm proud of the success from this mural and the amount of good that came from it far and wide, the best thing is being told, 'Curly, I've turned your Crown wall in to a Lego wall, designed the instructions, and wonder what you think of it'.

"And I absolutely love it - let's get it built. "You know you've made it when you've been made into Lego." Darwen based designers, RavScale Designs, headed up by Gary Ravetta, got in touch with Curly to ask about a collaboration, and the project got under way. 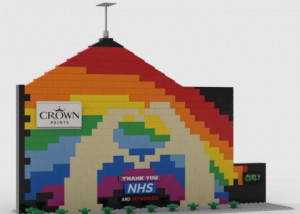 A statement from Ravscale Designs said: "We are pleased to announce a collaboration with local artist Keiron 'Curly' Whitehead.

"Under the RavScale Brickworks banner we create models of local landmarks and Artworks using LEGO(R) MOC process (My Own Creation) and hope to have pricing and availability by the end of June this year. "We have two sizes planned, a small brick version which will be widely available, and a large brick version, which will be to order only due limits on current part availability." RavScale Hobbies is an independent designer and manufacturer of 3d printed miniature parts and kits for all modelling scales, to suit Railways, Diorama, Subbuteo, Scalextric, Dolls House and are based in Unit 7E Premier Mill in Darwen. 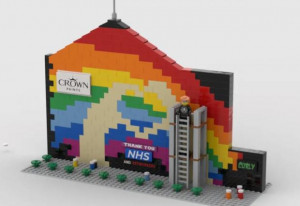 Mr Ravetta set up the company during lockdown after finding himself out of work and with a lot of time on his hands.  He began constructing models from Balsa Wood, and then looked for a way to make the parts more easily and bought his first 3D Printer, which enabled him to manufacture the parts he need in plastic to exact dimensions every time.

By July 2020 Mr Ravetta had moved into a small workshop in Darwen and as well making things like Subbuteo accessories he had begun 3D Printing small models of Darwen Tower and The India Mill Chimney. He then took to social media to show off his designs and asked people what they would like to see him design next and Curly's name cropped up. He said: "I worked on the design for a few months and sent him over the renders of the wall and of a 'Curly minifigure'.

"He told me how a new thing is artists having their work turned into Lego and he wanted a model making for himself, so I got to work." Pre-sales for the Lego are hoping to start in June and RavScale is looking at making at least 10 sets which are made up of 700+ pieces, which will sell for around GBP75. The Lego will also be signed by Kieron and will include a Curly minifigure with each.

At the time of painting the NHS mural, Curly said: "I'm so proud to work alongside Crown Paints to create this mural.

"I really hope the community enjoys the artwork as much I know I will enjoy creating it and I'm sure the message of gratitude that has inspired the design will go far and wide."

India Mill Chimney Virtual Building Instructions are available for download at a cost of GBP3.99 from: https://rebrickable.com/mocs/MOC-99519/RavBricks/india-mill-chimney-in-darwen-lancashire/#details