This entrepreneur creates elaborate artworks made from Lego. Now she’s turning to NFTs to take her business to the next level. 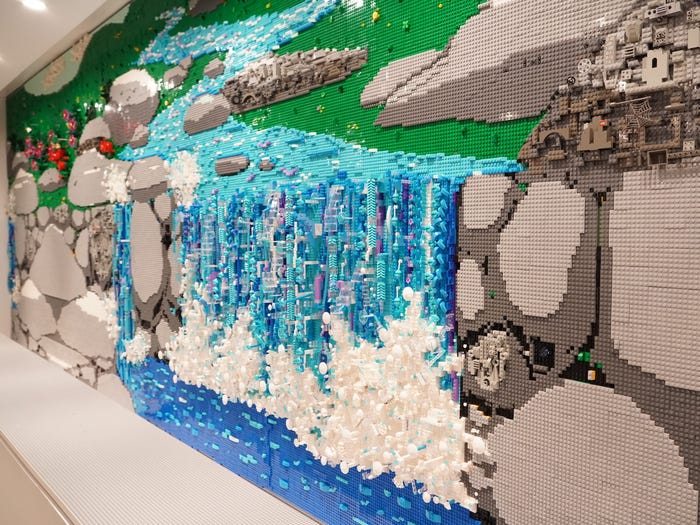 In the art world, Jessica Ewud is known as "Ragzy."

Ewud originally went to college to study finance but after graduating during the 2008 recession, she pursued her passion for art instead.Jessica Ewud

Much of her work has depicted prominent figures throughout history, including Abraham Lincoln.

An original Lego-based portrait of Abraham Lincoln, which is partly paintwork and partly Lego.Jessica Ewud

A portrait of Marilyn Monroe created with Lego, paint, and crystals.Jessica Ewud

Other creations include a portrait of NASA's Perseverance rover, which used more than 100,000 pieces.

A depiction of NASA's Perseverance rover was created by Ewud for software company Splunk. It has multiple layers to bring a dynamic and dimension to the piece.Jessica Ewud

And a mural of a waterfall.

Ewud said her art was originally inspired by a dream she had one night in 2016, in which she created a "LEGO Lincoln." She thought it to be so brilliant that she pulled herself out of a deep sleep to write it down.

The Lego-based portrait of Abraham Lincoln was showcased in Rockefeller Center.Jessica Ewud

In the beginning, however, she said she didn't find much success as an artist. "Every artist goes through growing pains," she said.

But ultimately, her art was discovered by several art galleries and fans on TikTok. This creation depicts a flower vase sculpture, labeled "Pandora's Box." It is made from approximately 20,000 Lego pieces.Jessica Ewud

Now, a few of her pieces are hanging next to artworks by legends including Andy Warhol and Salvador Dali, she said. Her increasing popularity has also meant she has been able to build a sustainable business due to consistent demand.

Andy Warhol-inspired Lego flowers. The artwork is on display at the NoMo SoHo boutique hotel in New York.Jessica Ewud

It has subsequently led her to diversify herself as an artist.

Ewud says her digital artworks are in high demand. So far, she has created nearly 100 of her digital pieces, which have all sold out. She told Insider that her move into the NFT space to sell digital artwork has subsequently contributed towards a new and sustainable source of revenue for her business.

"I love NFTs because they allow me to collect a royalty if something is ever resold, something that doesn't happen with physical artwork," she said. "Most artists have never been paid fairly, and blockchain is changing that."

There are lots of hidden meanings in the art that make each heart personalized to the owner, Ewud said.Jessica Ewud

As part of her advice for aspiring artists, Ewud said: "In the beginning, it will be tough, it always is.

But make sure you are true to yourself and your art no matter what. If you're running around trying to be someone else, who is going to be you?" Ewud uses adhesive in her artwork as she learned that Lego can fall apart. She also varnishes the bricks to prevent them from UV damage.Jessica EwudDeal iconAn icon in the shape of a lightning bolt.

It indicates a way to close an interaction, or dismiss a notification.