Rumour: Uncharted May Be Getting a LEGO Set Soon 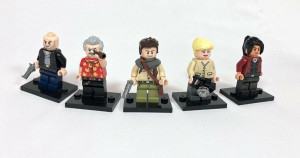 Rumour has it among dedicated LEGO communities that Uncharted 4: A Thief's End may be getting its very own set. This would follow in the footsteps of various video game tie-ins, including - famously - Super Mario and Sonic the Hedgehog. According to a post on Brick Fantatics - citing an Instagram insider named Falcon Brick Studios - the pack will launch in March.

A Horizon Zero Dawn set has also been rumoured in the past, so it's possible there may be some kind of PlayStation series in the pipeline. It's worth mentioning that the original source pegs this rumour with the ol' "pinch of salt" disclaimer, but it's hypothesised the Uncharted set will include 1,326 pieces and will include both a cave and a Jeep. It would certainly make sense with the impending movie and Uncharted: Legacy of Thieves Collection, but we're sceptical of the source to say the least.

Nevertheless, if this is happening expect an announcement imminently.