A Central New York family's LEGO replica of "It's a Wonderful Life" has received enough votes to be considered for an official LEGO set.

Jason Middaugh, of Marcellus, N.Y., designed "It's a Wonderful LEGO Life" with his 13-year-old daughter, Jane, to celebrate the movie's 75th anniversary. The creation hit the goal of 10,000 fan votes on LEGO's official "Product Ideas" website Friday; LEGO says it will consider producing official versions of any submission that gets 10,000 supporters.

"Welcome to the 10K club! Your project will now be reviewed by our experts," the toy brick building company's website says.

The set features a replica of the Granville house from the 1946 film, where each floor can be removed to see memorable scenes including the Christmas tree (and bell) in the living room and the "George Lassos the Moon Drawing" on the second floor.

It also includes the famous truss bridge where George Bailey (Jimmy Stewart) contemplates suicide; George's car; a sign that says "You are Now in Bedford Falls"; and Minifigures of the entire Bailey family (George, Mary, Pete, Tommy, Janie and Zuzu) along with Mr. Potter in a wheelchair and the angel Clarence.

Jason Middaugh, of Marcellus, N.Y., and his daughter Jane created a LEGO replica of the 1946 movie "It's a Wonderful Life" for the holiday film's 75th anniversary, hoping to get it turned into an official LEGO set. The design includes Minifigures of George Bailey, Mr.

Potter and the angel Clarence.

Middaugh told syracuse.com | The Post-Standard that he and his daughter are big fans of Christmas movies, including the Frank Capra classic. They started the project just for fun, but then got serious after visiting the It's A Wonderful Life Museum in nearby Seneca Falls, N.Y., which touts itself as the "real Bedford Falls" that inspired much of the movie.

"We went and visited the museum and we said we built this (version of the Bailey Brothers loan building) and kind of loaned it to them and the reaction was so great," Middaugh recalled. "We went back to the drawing board and created the house from the movie and the bridge and all the characters."

The design took a couple weeks, but about half a year to fully realize it. He and his daughter started with a "tester," first building the set with whatever LEGO bricks they had at home as a proof of concept.

"And if it works, LEGO has software that can help you build the structure and that will help you determine what are all the pieces you would need," Middaugh said.

Then they used the website bricklink.com, where people sell individual LEGO pieces from their own collections, to get all the necessary pieces to fully realize their vision.

They ending up making multiple copies of the design, giving one to the It's A Wonderful Life Museum and keeping one for themselves as they submitted it to LEGO Ideas last winter. 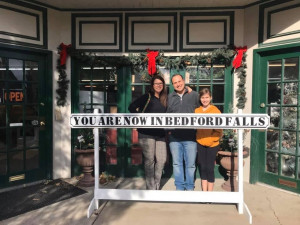 "It's been definitely a learning experience," he said. "It's much more of a logistical exercise than people realize."

If LEGO approves the design, Middaugh will be invited to collaborate with official LEGO designers to finalize the set and make it an official product available in stores.

He and his daughter Jane previously tried to make a LEGO replica of the "A Christmas Story" house where Ralphie asks for a Red Ryder BB gun ("you'll shoot your eye out, kid!") -- leg lamp included! -- in the 1983 holiday movie.

The design got more than 10,000 signatures in 2017, but did not get approved due to licensing issues, Middaugh said.

Other LEGO sets that were approved and made available in stores after being submitted by fans include designs inspired by "Ghostbusters," "Friends," "Seinfeld" and "Home Alone."

"It would be pretty amazing to have an official LEGO set designed locally," Middaugh said.